“Our mission is to help students who are exploring their interests and developing their character by collecting in one place essays on important topics from the people who teach at and run colleges.”

One reason to go to college is to be among people older and wiser than yourself. We want to collect stories from the people who populate colleges about how they have come to care about what they do and learned what they know.

The goal is to provide young people in college and considering going a sense of the people who make up an institution. We do not want to be used as a tool for marketing colleges however we encourage institutions that are committed to authenticity to encourage their people to participate. 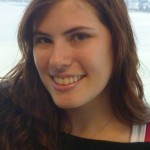 Adrienne Rodney has joined the team as editor for Q4Colleges. She is a writer and editor for No Shortage of Work and works on a quantitative trading desk. Adrienne is a big proponent of higher education and is optimistic that Q4Colleges will guide prospective students (and their parents) in the right direction. She has a Master’s in Journalism from Boston University. She can be reached at: Adrienne@Q4Colleges.com.

NB. At the time of these discussions, we were imagining that only college presidents would be asked to submit material to Q4Colleges. Since then we have changed our focus.

After Brooke’s successful conversation with Dr. Middleton (President of Roosevelt University) Q4Colleges co-founder Jason Rosenfeld decided to speak with a number higher-ups at Harvard and found them very approachable. Most of them only wanted to talk off the record, however Larry Summers, was unabashed in his comments.

Lawrence Henry “Larry” Summers was the Secretary of the Treasury before becoming Dr. Faust’s predecessor as Harvard President from 2001 through 2006. Jason met with Dr. Summers in his Harvard offices and presented our plans to ask every college president to write an essay revealing of his or her character. His responses were direct and to the point:

He concluded by saying that although he wasn’t impressed by our approach as formulated, perhaps our idea was in fact a good one and he will turn out to be wrong. After all, he said, most entrepreneurial ideas that turn out well are the ones that are rejected by experienced people like him.

Jason and Brooke were immensely grateful for the time and insights of these people (and others who spoke with them off the record) and after digesting their comments the two of them decided to change Q4College’s vision and mission.

Can there be a more enthusiast supporter for our mission than the people of an institution founded by a man of tremendous integrity and that challenges its community to give words true meaning?

Jason and I had been thinking about Q4Colleges all summer and we had concluded that the best thing would be for us to come up with only one question and try to get every college president in the USA to answer it.

That was before I met Dr. Middleton. 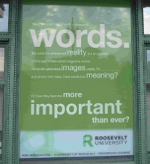 In September 2011 I was walking along South Michigan Avenue in Chicago when I saw a sign in a window. It said: “They say a picture is worth a thousand words, but what if it reflects not reality, but an agenda? In this age of airbrushed magazine covers, computer-generated images, reality TV, and phony viral video, have words lost meaning? Or have they become more important than ever?”

The window belonged to Roosevelt University, which, frankly, I had never heard of. So, I looked it up and found this history: “It all started in 1945. Edward J. Sparling, then president of the YMCA College in Chicago, refused to provide his board with requested demographic information regarding his student body, fearing they would instate a quota limiting the number of blacks, Jews, immigrants, and women enrolled.” Sparling resigned and nearly half of the faculty and staff left with him.  They started a college named for Franklin Roosevelt, whose wife Elinor dedicated the college on November 16, 1945.

WOW. We wanted Q4Colleges to be about integrity, leadership, and personal narrative at colleges. What better place to start?

I called Roosevelt’s president, Dr. Charles Middleton, and in a short interview, he taught us a good deal that changed our direction at Q4Colleges.com.

“There is considerable literature expressing the problem that over the last 15 years, Presidents don’t get involved in anything controversial but rather stay safe,” Dr. Middleton said. “They can’t afford to alienate anybody and are bland compared to their forerunners. Writings of college presidents have a sameness to them, and there is little advocacy for change.” In short, college presidents are in a vulnerable position and they are a timid bunch.

I asked, “What is the fundamental question in Higher Education?” and he said unhesitatingly, “Survival. There is a growing disconnect between perceived value and real value.” Dr. Middleton feels that colleges are in a position analogous to the American automobile industry in the 1980’s. The challenge is how to reinvigorate our institutions without destroying the possibility for creative thinking and discourse.

It was after speaking with Dr. Middleton that we decide to broaden our mandate, increasing the breadth and depth of the essay questions we would ask. Instead of just targeting presidents, we would invite participation from everyone a college student would hope to find when they arrive – faculty, staff, and presidents.

Harvard Student Jason Rosenfeld has joined the Q4Colleges team as a co-founder. He is set to graduate in May, 2012.  He is concentrating in Statistics and getting a secondary in East Asian Studies, with a foreign language citation in Mandarin Chinese.  He is interested in basketball and especially in applying statistical analysis to basketball, and has done work and internships both nationally and internationally with basketball teams.  He speaks Mandarin Chinese fluently.

He can be reached at jasonwrosenfeld@gmail.com.

In his senior year in high school, Jason Rosenfeld received some good news and what turned out to be even better news.

The good news was that he was accepted to Harvard but the better news was that they said he would have to cool his heels for a year before attending. So Jason landed an internship at MD Sass, a securities firm in New York City. There he met Al Slawsky.

Jason said he would get a degree in Economics from Harvard and then apply for a job at Goldman Sachs.

When Al asked why, Jason said, “Because that is where all the smart people go.”

Al laughed, “No. That is where all the greedy people go.”

Jason learned from Al both about the markets and about life. He learned that humans don’t live long enough to spend time doing what they don’t love. It was as if Al gave Jason permission to want a career in sports instead of finance.

After Jason got to Harvard he realized it was different from what he expected. Not necessarily bad, just different. He realized that he went to Harvard not because he knew it was his best choice but because he assumed that if he got in then, of course, he should go.

Through Al Slawsky, Jason was introduced to Brooke Allen, a securities trader with two sons who had between them visited more than 30 colleges. Even with all the brochures, US News rankings, college guides, RateMyProfessor.com, and on-site tours, they were unable to get a handle on the character of each place, or the people who inhabit them.

Jason and Brooke began corresponding in March of 2011. Brooke told how he would ask during campus tours, “What kind of students discover after they get here that this is not the place for them.” He would get answers like, “The kind who do not like a beautiful campus with small classes and dedicated professors.” Brooke would think to himself, “Who are these people?”

Brooke had already secured the domain name, Q4Colleges.com with the hope of building a place where people could ask colleges questions that would reveal their true nature. When they met, Jason and Brooke began discussing what they should do and by August of 2011 they had decided they would ask every college president in the U. S. A. just one question as a sort of test of their character.

Although that is what they imagined doing, it proved to be only a beginning.

Ever since Brooke Allen began taking his sons around to visit colleges five years ago he has had many unanswered questions.

And they were not of the “When is the health club open?” or “What is the football team like?” variety.

What he really wanted to ask was, “What are the people who run this place like?”

Might it be possible to ask each college president to answer one question every year and then publish their answers for everyone to see? After all, applicants to Harvard alone write 120,000 essays. Perhaps it isn’t too much to ask Harvard’s president to write one essay.

Brooke began talking to anyone who’d listen about his idea in the frantic hopes someone would steal it and do  it. Although plenty of people said they’d love to see the project implemented, nobody wanted to run with it.

So, finally in the summer of 2011 Brooke decided to make it happen.

Brooke heads a proprietary trading desk for a securities firm, and he has a background in Mathematics, Computer Science, and Finance. He is a big fan of higher education and he is particularly thankful to Rutgers and the taxpayers of New Jersey who, back in 1974, made it possible for him to pay for college himself and graduate debt-free. Both his sons went to McGill; one graduated in 2010 and the second will graduate in 2012. He shares an empty nest in New Jersey with his wife, Eve.

You can read more about Brooke at: BrookeAllen.net and you might want to look at a website he created to help his out-of-work friends: NoShortageOfWork.com