Admissions Essay: Indicate a person who has had a significant influence on you, and describe that influence. 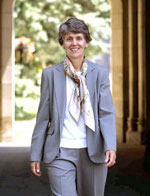 For Catharine Hill, it was more than one person who made an impact in her life. It was two specific professors that encouraged her to take her love of economics and education and merge the two, thus bringing her to the position she holds today. You can read about the influence they held in her essay for the Wall Street Journal.

Catharine Hill is the president of Vassar College and former provost at Williams College. An economist by trade, she previously worked for The World Bank and the Congressional Budget Office.