Who gets to be on top? 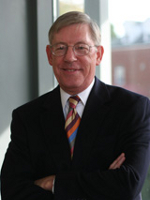 On balance, elite higher education helps maintain social inequality in America, and the economic recession is magnifying that problem, especially at public institutions.

During the past two decades, research that Alexandria Walton Radford and I conducted found that a rising proportion of students who are enrolled at selective colleges and universities has come from the top two social-class categories: upper-middle- and upper-class families. And at the private institutions we studied, there is a pronounced upward slope to the relationship between the probability of being admitted and the socioeconomic status of one’s family.

When one considers the positive economic rate of return of a college education—and especially of a degree from a name-brand institution—it is easy to see how selective private higher education confers, concentrates, and consolidates privilege for students who have grown up in well-to-do circumstances.

How that happens is illuminated by following a cohort of students through the process from college application to admission, matriculation, and graduation. More than half of all applicants to selective colleges come from upper-middle- or upper-class families. By the time of graduation, the proportion has risen to 60 percent.

This is not to say that American higher education is not an engine of social mobility; it is for some students. On an other-things-being-equal basis, selective private institutions give a pronounced boost in the admission process to nonwhite students from lower- and working-class family backgrounds. For white applicants, however, the relation between admission probability and parental socioeconomic status resembles an upside-down cereal bowl: It is highest for middle- and upper-middle-class students, lower for upper-class students, and lowest for lower- and working-class students.

A number of steps could be taken to increase socioeconomic diversity and ease the endless recycling of privilege. Though it would be financially challenging, it would help if colleges could practice “socioeconomic neutrality” and not favor the most well-to-do candidates in the process that admits, enrolls, and graduates students. Need-blind admissions and policies promising grants rather than loans would be a useful start. In addition, widening the applicant pool to include more lower-income students would go a long way toward reversing current trends. First, recruitment should receive as much time and attention as admissions. Second, relevant parts of colleges’ Web pages for admissions and financial aid should be translated into Spanish and perhaps other languages. And third, it would help to conduct focus groups on campus with students from modest economic backgrounds, to hear their stories about how they got “from there to here.”

Thomas J. Espenshade is a professor of sociology and a faculty associate in the Office of Population Research at Princeton University. He is the author of No Longer Separate, Not Yet Equal.

This article was originally posted in The Chronicle of Higher Education, July 2, 2012.