What would you tell your high school self? 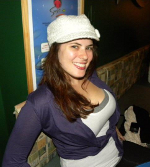 You probably have an idea (or wish) of what life will be like at 32. I’m sure you’re very successful (you want to be a publicist, right?), thin, educated and probably married with children. I’m sure you also got to where you wanted to be by 27. Am I right? Is this what you imagine?

Unfortunately life doesn’t work the way you want it to. That doesn’t mean life is worthless, just that what you envision is not always reality.

Life at 32 will be NOTHING like you think it will be, but that’s okay. There are some lessons I’ve learned along the way that I’d like to pass to you.

1. Don’t let others make important decisions for you.

I’m going to let you in on a secret. You’re going to want to join the Peace Corp, really want to join, but many people in your life will discourage you. After the hundredth time hearing, “It’s not the 60s; the world is dangerous; you’re not a hippie,” you decide against going.

But you’re going to regret it.

When you want something, really want something, and you spend hours, months, even years looking into this one thing calling your name, grab on to it and hold for dear life. Do NOT let anyone, your best friend, your dad or your teacher, tell you otherwise. Everyone has an idea on what you should be doing, but they aren’t living your life. You are. Letting people make decisions for you only leads to regrets. If it turns out you made a mistake, that’s fine. At least it was your mistake and no one else’s.

You’re a scaredy cat; admit it. You’re afraid to challenge authority. You don’t like standing up to your friends. Hell, you can’t even stand up for yourself.

Don’t be afraid to jump into the deep end – go head first if you have to. Try things you’ve never done before. Travel when you get the chance. Go to school in a different city. Do something you know will freak your parents out. Just stop holding yourself back because you’re afraid of the consequences. You will never find success if you don’t encounter failure.

It’s so easy to be impatient, and let’s be honest, patience is not a virtue you were born with. In fact, it’s never going to come easy to you, but that’s no excuse for not trying.

Don’t rush into things. Think critically about every decision you’ll make instead of jumping in. I know it sounds weird to say right after I tell you to let loose and be fearless, but this is different. Don’t go to college right away if you’re not ready. If you are, don’t commit yourself to the first major that sounds interesting. Take classes in every subject you can get your hands on and see what grabs your soul. Don’t be in a hurry to get an apartment, graduate, start a career and then find your soul mate. Don’t jump on the first decent opportunity to come your way. Don’t think you have to rush or life will pass you by.

Take time to make the RIGHT decisions, and you won’t have to worry about the stupid mistakes made in haste.

It’s hard, especially when you’ve never had much. There’s going to come a time when you are saddled with debt in order to go to school, in order to survive. You’re going to take out loans and credit card debt because, hey, “I’ve never had the money to pay for something like this but one day I will have a job that will allow me to afford it.”

That’s the wrong way to think. Learn to value your money like you value a loved one. Don’t assume that letting it go means it will come back to you. Understand that your parents are right: money doesn’t grow on trees.

Take good care of your money and even better care of other people’s money. If you can’t pay back a loan (or don’t think you’ll have the money to pay it back in ten years) don’t take it. Be smart, be creative, be relentless about finances. There is nothing good about thousands of dollars in student debt, no matter what you’ve been told. Believe it or not, a recession could happen and finding a job won’t be so easy anymore, whether you are college educated or not.

Adrienne, I don’t mean to be patronizing, I just want you to learn from MY experience. There’s going to so much thrown your way that will knock you over, beat you down and drag you across the highway. But you’re going to get back up, scrapes and all. You’re going to move to the East Coast (by yourself!) and gain a whole new set of experiences and friends that will make your life better. But if you have the chance, try not to take as many turns as I did. You’ll have fewer scrapes.

One thought on “Life Is Never What You Expect It To Be, And That’s Okay”