Do we need to pay for knowledge? 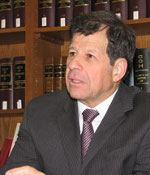 Last month, as college students across the country prepared to head back to campuses, my fax machine coughed out my annual “Request for Permission” from the Copyright Clearance Center, the corporation that is one of the world’s largest brokers of licenses to copy other people’s work.

As in past years, the center asked me how much I wanted to charge to permit Middle Earth College to include a copy of Chapter 5 of my book, Liking and Loving: An Invitation to Social Psychology, in a course pack for the 18 students enrolled in Professor McClain’s Management 710 this fall. (I’ve changed the names of the college, the professor, and the course.)

If past experience were a guide, I could name my price, out of which the Copyright Clearance Center would take its 15-percent commission. Given how oppressively high college tuitions have become these days, I doubted that the students would notice the extra three or four dollars that I could ask each of them to pony up for the right to have his or her own copy of Chapter 5. The form had blanks to check for “fee for page,” “fee per copy,” and “flat fee,” but not for “no fee.”

I was delighted that Professor McClain wanted to use my chapter again, especially given the hefty permission fees I have charged in past years. It’s true that Liking and Loving was published 39 years ago and has long been out of print. Some of the timely examples in Chapter 5­—such as the public events of Vida Blue’s rookie season for the Oakland Athletics, in 1971—are not quite so timely anymore. But I think it still holds up pretty well.

Yes, I knew that licensing fees had driven up the price of some course packs to $100 or more, to the dismay of colleges and students. Once a great innovation, allowing professors to create their own reasonably priced books of readings for their courses, the course pack was in danger of foundering. High licensing costs were also stretching college-­library budgets for the course pack’s digital offspring, the electronic version placed on reserve for students enrolled in a course.

On the other hand, we want American students to have the best possible educational resources, don’t we? And since Liking and Loving was going to enter the public domain awfully soon­­—in 2068—I figured I had better make the most of my copyright while I still could. There was just one problem, and, as a copyright lawyer, I couldn’t ignore it. Under current copyright law, Middle Earth College probably doesn’t need my permission—or anyone else’s—to include my chapter in the course pack. The university and its bookstore have a right to make copies of the chapter for enrolled students without even asking, under the copyright doctrine of fair use.

If this was fuzzy before, it’s clearer now, from the careful opinion issued in May by the federal judge Orinda Evans in the test case brought by publishers—and paid for in part by the Copyright Clearance Center itself—against Georgia State University. After a two-week trial in Atlanta, Judge Evans ruled that Georgia State had the right to make available to enrolled students up to one chapter of a 10-chapter book without permission or payment, as a matter of fair use. That’s because the constitutionally prescribed purpose of copyright is not to enrich authors or publishers but rather to encourage the progress of knowledge.

Under Judge Evans’s opinion, in an instance like the Middle Earth request, three of the four determining factors for fair use come out in the “fair” direction: First, Professor McClain is assigning my chapter for nonprofit educational purposes, not for commercial gain; second, although some have said that Liking and Loving reads like a novel, it is a factual and—ahem!—scientific work; third, the portion that is being copied is only one chapter out of 10 and makes up only a small proportion of the book’s pages.

The only factor that tilts in the “unfair” direction is the fact that, thanks mainly to the work of the copyright center, there is a readily available licensing market for photocopying excerpts of my book. In 3-to-1 cases like this one, Judge Evans determined that Georgia State’s copying was fair use and required no permission at all. Out of some 75 instances that the court considered, the judge found only five to be infringements—and each of them involved the use of two or more chapters of a book. Although the Georgia State case involved electronic course reserves, not photocopies, the same fair-use calculus applies.

Copyright law is admittedly amorphous—in the first fair-use case, back in 1841, Justice Joseph Story called it “the metaphysics of the law”—and the publishers have filed an appeal. So it’s possible that the law will change.

But, in the meantime, Judge Evans’s decision is the leading case on this issue, and the Copyright Clearance Center, having supported the test case against Georgia State, should respect the court’s decision. At the least, it should inform copyright owners of the decision and give them another choice: a blank for “this looks like fair use to me.” That’s what I faxed back to the center this year, even though I had to write it in.

I think Judge Evans got the law right, metaphysical or not. The doctrine of fair use is an integral part of the system of copyright authorized by the Constitution “to promote the Progress of Science and useful Arts.” Requiring cash-strapped colleges or their deep-in-loan students to pay for the privilege of having a copy of every assigned course reading, no matter how small, is more likely to stifle than to promote that progress.

Professor McClain, if you’re reading this: You can keep assigning—and copying—Chapter 5 for as long as you want. From now on you don’t even have to ask.

Zick Rubin, a former professor of social psychology at Harvard and Brandeis Universities, is a publishing and copyright lawyer in Newton, Mass.

This article was originally published in the Chronicle of Higher Education, September 23, 2012.

2 thoughts on “Photocopy My Book Chapter? You Don’t Even Have to Ask”